The original name of this game is „šprtec“. The origin of the game is somewhere in Moravia at the end of 19th century (the name of the game came from werb for „push“ in South-Moravian dialect). In that time and for many decades, many children and adults used to play „šprtec“ with coins or buttons by the various rules.  The first unification of the rules came in 1960 in Brno, Czechoslovakia. Three ten-years old boys established the competition Table Hockey League Brno (the competition is still played). The rules and equipment were very similar to the contemporary used. The second important step came in 1980. Since that year, Czechoslovakian (Czech) national championships have been played. International contacts and expansion started in the beginning of 90`s. Since that time new name has been used for this game – BILLIARD-HOCKEY (Czech word „šprtec“ is unpronounceable for somebody). In 1992 European Championship and World Cup were organised in Brno, Czechoslovakia. One of three founders of Table Hockey League Brno – Dr. Jiří Ventruba – had been the first WTHA president (1992-2000).

Billiard-hockey is a game for two players. It uses billiard principles. The players play the draughts by the hockey stick. By the draught they try to shot the puck and score a goal. Choose the language and see how to play in the short version of the rules. 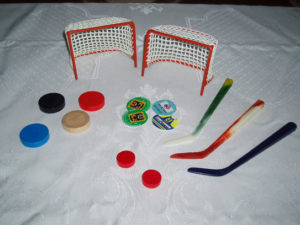 To play billiard-hockey you need this equipment:

If you want to buy billiard-hockey equipment, connect official sellers for detailed price-list and selling conditions:

In Russia (not confirmed):

Interested persons from other countries can buy the equipment during international tournaments or can connect directly WTHA to arrange the conditions.

Exact prices depend on topical offer and the rates of exchange. Postal charges are not counted in the mentioned prices.

However World Table Hockey Association was established to lead billiard-hockey competitions, the WTHA is open also for other table hockey or table football disciplines. WTHA organises or co-operates in organising of competions or non-competitive shows maily in these disciplines:

For more information about these disciplines or for integration your own table hockey to WTHA connect us.